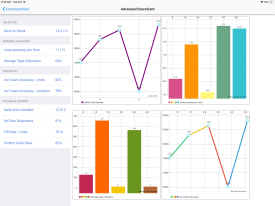 Key performance indicators (KPIs) can help you understand the efficiency of your distribution centers. In this blog series, we’ll look at the core KPIs and key figures that are central to the process. To start, we’ll review the KPIs most often used by distribution professionals today.

KPIs indicate the performance of a facility in respect to a process; they represent the relative efficiency of the process.  Key figures, on the other hand, help clarify the volume and characteristics of the work. This might include orders received, line items received or back orders. While typically out of the hands of distribution center managers, key figures do provide an important perspective to the KPIs under review. Therefore, consider these values as part of a proper performance improvement program. In today’s post, we’ll focus on the inbound process.

In our experience, few distribution centers have KPIs in place to track receiving. This is counter to what you would expect, as a correct initial receipt is a key component to reducing rework and errors. Let’s first identify key figures to track.

Unloading times – The average time from gate-in to gate-out. Include load types to provide a proper metric for comparison.

Dock-to-stock time – Total time to move product through the receiving process so it is available for use. Typically represented as Turnaround time in hours/Minutes.

Use: Value is key to moving material through the distribution process and reducing inventory levels. A high number, especially exceeding four hours, means product is not available the same day it arrive. Dock-to-stock comparisons are possible against other distribution centers or peers.

Use: Reliability of carriers to arrive at appointed times. In high-volume DCs, this gauges to the effectiveness of planning resources based on appointment scheduling. This metric provides no value in a “first come first serve” environment.

Use: This KPI is not typically used to gauge performance against other distribution centers, but will provide an indicator to the effective use of resources over time.

Define the metrics to track

Defining the KPIs you want to track is a critical component of our newly released CommandView tool. In our next blog post, we’ll focus on KPIs and key figures for material handling. Feel free to share your comments or questions.

Phillip Avelar is a Managing partner at Advanced Solutions, based in Chicago. He shares his passion for solving customers problems in his blog posts, industry articles and talks. When he’s not writing, he’s working with customers to develop and apply innovative solutions to common problems in the supply chain.